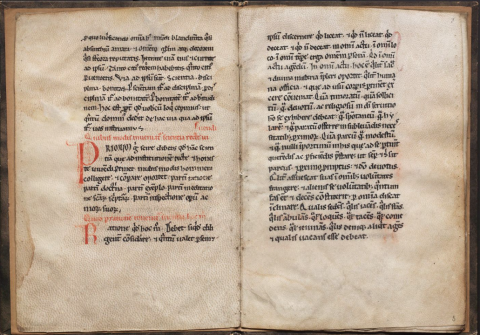 This twelfth-century manuscript, De Institutione Novitiorum, was written by the monk and mystic theologian Hugh of St Victor (b. 1096/7, d.1114). This small codex measures 22.5 x 15.5 cm with 18 total pages written in Latin on vellum leaves in Gothic minuscule with standard rubricated chapter headings. This codex is a piece of a mystical-aesthetic text directed towards the novices at the abbey of Saint Victor. The manuscript was left incomplete in the midst of the seventh chapter on the ninth leaf where it breaks off mid-page.

This twelfth-century manuscript is rather typical for its era of production. The text is written in the textura or angular style of Gothic minuscule that became dominant beginning in the twelfth century.[1] There are five rubricated headings in the text, with a vibrant and un-darkened hue that suggests either good preservation of the red lead pigment or the utilization of an organic pigment.[2] The codex itself is made up of four folios, with one added leaf making a total of 18 pages; this addition is not standard in a single quire and may have something to do with the hasty and unfinished nature of this manuscript.[3] Each leaf of the codex was carefully placed so that the hair sides and flesh sides of the vellum face one another to offset the contrast of the two.[4] The prickings in the margins, used to create evenly spaced text and rulings were never cut down, in this era they would have most likely been made with a lead point or plummet.[5]

The title of the text De Institutione Novitiorum is written in red above the first line on the verso of the first leaf, there is no title page. On each leaf of the text the writing begins above the first ruled horizontal line, whereas after the beginning of the thirteenth-century text began “below top line,” once again supporting a twelfth-century provenance.[6] In this century, procedures could vary depending on whether there was one or multiple scribes assigned to different aspects of production. In this instance, the single correction made on the verso side of the eighth leaf, which adds an abbreviation of dicta uestra written as dicta urã, seems to be in a different ink but the same hand.[7] Furthermore, a difference in handwriting between the rubrication and plain text is also unclear meaning there could have been only one scribe assigned to this work.

The varied forms of abbreviations used in the written Latin suggest this book was meant for private reading not public spoken reading.[8] Most often the last letters of a word, or even much of the middle of the word is omitted, this omission is signaled by a horizontal line or symbol above the letter preceding the dropped letters.[9] Also interesting about this manuscript, aside from some notes on the verso side of the fourth leaf, all of the scribbles, damages and corrections happen near the end of the text. On the verso side of the ninth leaf we find what could be some kind “pen-trial” for the scribe, or an annotation in the form of Arabic numerals and symbols that continue in two lines diagonally from the top right corner of the text.[10] The ninth leaf is also considerably damaged; it is smaller in size with three large holes of unclear origin out of the lower margin and a similar hole found on the facing page on the eighth leaf from the left margin, none of which inhibit the reader’s ability to see the text. The placement of this damage, away from the text and near the end of the quire suggests they could actually be original holes in the skin of the vellum.[11] On the verso of the ninth leaf, which is otherwise blank, we find three small sketches, and faded bits of unreadable text that could either be pen-trials or merely doodles of an inattentive scribe or reader.[12]

Missing elements from this edition of De Institutione Novitiorum present a modern researcher with many mysterious and possibly unanswerable questions. The vellum sheets after completion, rubrication and correction would normally be folded, gathered, sewn and bound however, the fact that this text is unfinished calls into question if the quire would have been hard bound at all in the twelfth century or if it would have remained loose or “in quaternis.”[13] The binding is quite clearly not original as at the top ripped corner of the binding boards one can see stuffing with modern type script, as to when and who replaced or added this binding there is no record. As noted by Sister Wilma Fitzgerald the text stops abruptly mid-sentence on the ninth leaf of this codex on the words “ad eiusedem similitudinis imaginem” which should continue as “nos quoque figuramur.” Also fascinating, when compared with the full Latin text, on the verso of the fourth leaf the text ends and should pick up on the recto of the fifth leaf with “suppetite ses debet exercere.” Instead it continues mid-sentence a whole chapter later with “cum omni humilitate,” signaling that pages were either skipped by the scribe or removed at a later point. In general, this text, although filled with anomalies and unanswered questions, fits well into manuscript tradition of its time in material, writing, and rubrication.

Aside from the technical aspects of this surviving twelfth-century manuscript, its material qualities, and how it fits into the tradition of manuscript production, we must also consider the substance held within the lines of script and the personality behind its creation: Hugh of Saint Victor. Hugh, Hugo, or Hugues was a monk, scholar, and theologian considered one of the most influential figures of the twelfth-century theologians along with Bernard of Clairvaux.[14] Originally of Saxon birth and ancestry, scholars speculate he was born around 1096 and came to the abbey of Saint Victor with hopes of studying under William of Champeaux.[15] From 1133 until his death in 1141 he was the head of the school of Saint Victor, a time known as its golden age of education.[16]

Hugh wrote many treatises still studied today, his most famous the Didascalicon, is a guide on learning, and how to read and understand the Holy Scriptures.[17] Hugh’s work is largely remembered for its emphasis on mysticism and the value of learning, however our text, De Institutione Novitiorum, falls somewhere in between; written just after the Didascalicon,  it is a sort of instructional manual targeted towards novices concerning disciplined behavior from gesturing to eating.[18] This text is treated as marginal when compared with his more prominent mystic works.[19] Yet, some scholars for varying reasons contend its importance, from a window into the personality of Hugh to an opportunity to learn about daily life within Saint Victor.[20] The sheer level of circulation of this work within and outside of monasteries of all orders by the fourteenth century suggests this work was heavily referenced for discipline by ecclesiastical and lay people.[21] At the beginning of the fourteenth century there were actually more copies of De Institutione Novitiorum in circulation than of Didascalicon, with only his mystical analysis of the ark of Noah having more copies in existence. It is also not the first work of its kind, with similar treatises on behavior written by Ambrose, Gregory, John Climacus, and in the eleventh century by Godfrey of Rheims and William of Conches.[22] Despite the strange and often unpolished organization and phrasing of this text, its concept that discipline of the body and the appearance can in turn create inner goodness was quite popular in its time despite the nearly forgotten place it occupies for modern scholars of Hugh’s oeuvre.[23]