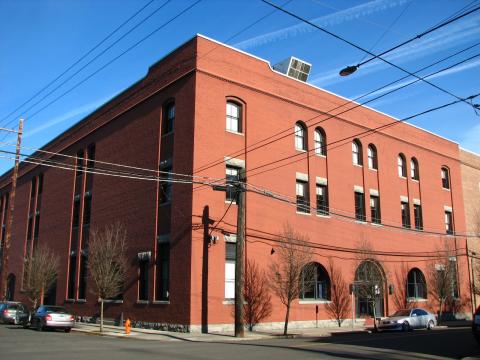 The Spokane, Portland, and Seattle Railroad Warehouse, more commonly known as the Christiansen Building, is located at 1631 (formerly 555[1]) NW Thurman Street in Portland, Oregon. Built in 1900 [2], the building features a flat roof with a parapet, round-headed and elliptical windows, a rounded main entry with a multi-paned transom, a rock-faced ashlar base and window lintel, and an exterior of brick with decorative brickwork just below the parapet.[3]

The architectural style of the Christensen Building was inspired by the Richardsonian Romanesque Revival architecture and its progenitor, H. H. Richardson. His style utilized the architectural ideas he had learned at the Ecole des Beaux-Arts in Paris while still incorporating the Victorian eclecticism of the post-Civil War U.S.[4] It features single-hued stone with round-arched elements, which is easily seen on the Christiansen building. Though quite ornate in its iron details such as those that can be seen on some of the doors and windows,[5] it is still more utilitarian, and has a harder lined set of features with less dramatic arches than many other buildings in the same style, such as the Davis Block. However, regardless of this, it never loses the distinct features unique to the Romanesque Revival buildings. It is larger in size than the Davis Block, covering .9 acres of land, and stretching vertically around 40-50 feet.[6] Red paint has been layered on top of the original brickwork, however, there is still clearly a red brick structure underneath. Unless one had observed it prior to its painting, it is difficult to say if the individual(s) who decided to do this were covering up fading and discoloration from age, or merely trying to enhance its curb appeal.

The Clyde Equipment Company has been a part of the Christiansen building for 52 years from 1923-1975, which can be extrapolated from newspaper ads featured in the Oregonian Newspaper. They alternated between different kinds of equipment on occasion, but their consistency is remarkable.  An interesting addition to this story is that, for a brief time on June 16, 1929, a section of the newspaper states that one H.W. Hopkins had been authorized to make some changes to the building with a budget of $8,000. However, it was discovered that that this project lost funding, and was not undertaken. The fact that the business lasted for just over half of a century, which is around half of the building’s lifetime thus far, emphasizes the importance of both the Clyde company and the building itself to Portland’s architectural history.

The Christiansen building shares many of its features with so many other Richardsonian Romanesque Revival buildings, which helped to establish Portland’s visual identity. The grand but simple design is a hallmark of the architectural style’s Medieval roots that also helps to connect Portland to a deeper past though buildings like the Christiansen building.

All newspaper references were sourced from https://oregonnews.uoregon.edu/, where individual examples can be found of each of the mentioned articles on the dates specified.

Protocol:
Architecture - Public Access
Community:
Medieval Inspired Architecture
Category:
Architecture
Keywords:
Romanesque Revival, Richardsonian Romanesque
Rights:
Image reproduced with permission from Portland State University. The institutions that house the specific Medieval Portland objects ultimately hold the rights to their image and reproduction; the images are provided here as a courtesy by those institutions and are for non-profit, educational use only.